Bloomberg View: It Matters Where Solar Panels Are Made

It's a lot tougher to innovate when the technology doesn't start at home. 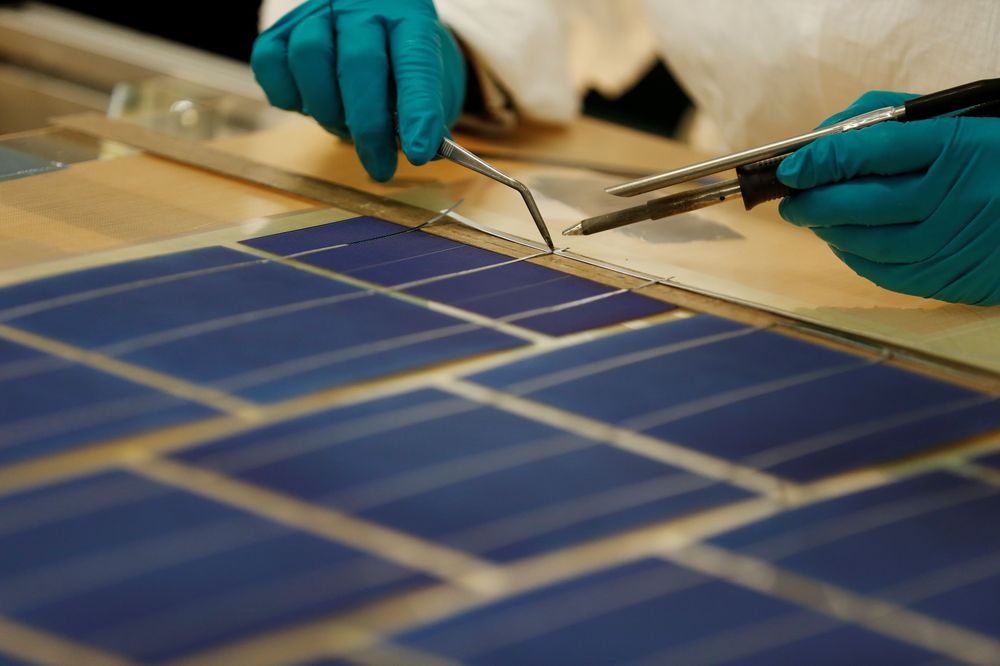 The oil industry was born in Pennsylvania in 1859, and Americans have played a leading role in it ever since. Even after the U.S. lost its status as the world's top oil producer in the 1970s, 1 it remained the industry's main source of equipment and expertise. The lists of the world's biggest non-state oil and gas producers and top oilfield equipment and services providers are heavy on U.S. companies, and Houston is the closest thing to a global headquarters that the oil and gas industry has. In recent years, U.S. technology and entrepreneurship have even brought a production resurgence that has made this country again the world's biggest source of petroleum and natural gas hydrocarbons and may soon even catapult it back into first place in crude oil production.

In renewable energy, things have played out a bit differently. The first practical solar cells were developed -- as were so many other things -- at Bell Labs in the 1950s, and for a long time the U.S. was the undisputed leader in solar technology. During the oil crisis of the 1970s, the U.S. also made big investments in wind power. After that, though, interest and investment in both wind and solar fluctuated with politics and the price of oil. As of 2016, according to the most recent data from the International Energy Agency, the U.S. was No. 4 in installed photovoltaic solar capacity, behind China, Japan and Germany. It was No. 1 in wind power generation in 2015, according to the U.S. Energy Information Administration, but China seems certain to pass it soon if it hasn't already. Perhaps more important, when it comes to making solar and wind equipment, the U.S. simply isn't that big a player. There is only one U.S. company (General Electric Co.) among the global top 10 wind turbine manufacturers, and one (First Solar Inc., which does most of its manufacturing in Malaysia) among the top 10 solar-cell makers. The wind industry is headquartered in Europe, and the solar industry increasingly in China.

Last week, as I'm sure you have heard, the Donald Trump administration slapped a 30 percent tariff on imports of certain solar cells that the U.S. International Trade Commission found last fall to be an unfairly priced threat to U.S. manufacturers. Most media coverage of the decision has focused on the effect on the U.S. solar power industry, which is up in armsabout a move that will raise its costs. Fair enough. But wouldn't it also be a good thing for the U.S. to have a bigger solar-cell manufacturing industry?

There are several reasons why it might be. The most discussed but probably least compelling one is that it would create factory jobs. Installing and maintaining solar and wind power equipment employs a lot more people than making it, and the Bureau of Labor Statistics projected last year that the two occupations with the fastest projected job growth in the U.S. over the next decade will be solar photovoltaic installers and wind turbine service technicians. 2 If jobs are the metric, then keeping solar panels cheap seems more important than having them made here.

A better argument that Harvard Business School's Gary Pisano has been making for almost a decade now is that manufacturing capabilities underpin innovation and economic growth. Let them go overseas, and much more is lost than just production jobs. A recent paper Pisano co-authored with economists David Autor, David Dorn, Gordon H. Hanson and Pian Shu found, for example, that U.S. firms exposed to rising import competition from China received fewer patents (a proxy for innovation) and reduced spending on research and development.

In a 2012 paper titled "Green Mercantilism: Threat to the Clean Energy Economy," Matthew Stepp and Robert D. Atkinson of the Information Technology and Innovation Foundation, a bipartisan Washington think tank, took things a step further, arguing that China's use of subsidies, trade restrictions, currency manipulation and theft of intellectual property to give homegrown solar and wind equipment makers a leg up was hurting energy innovation not just in the U.S. but also worldwide. The Chinese approach, they argued, was less likely to "produce successive waves of innovation" than a strategy based on "broad support for innovation (including support for education and skills training, and competitive trade, immigration and tax policies) as well as funding for research, development, and deployment targeted at clean energy innovation."

Atkinson, not surprisingly, welcomed the Trump tariff announcement. "At least it sends a message to the Chinese that there are going to be some consequences to this mercantilist behavior," he told me over the phone last week. But he also said the tougher line on Chinese solar imports, which actually began during Barack Obama's second term, has almost certainly come too late. A better policy, he said, "would have been to close the barn door before the Chinese horse got out."

The best approach for the U.S. going forward, Atkinson says, is to look beyond current technologies. "The game should be, 'What's the next transformative technology in solar? How could we be the world leader?'"

That's easier to ask than answer, of course. The U.S. does still seem to be fertile ground for starting innovative energy companies; it came in fifth -- behind four countries with much smaller gross domestic products -- on the 2017 Global Cleantech Innovation Index, which attempts to measure "where, relative to GDP, entrepreneurial clean technology companies are most likely to emerge from over the next 10 years." As in the oil and gas industry, U.S. technological know-how and business dynamism can be an advantage.

But it's worth thinking about what else has enabled the U.S. oil and gas industry to play such a durable global leadership role. One obvious asset has been the presence of huge amounts of oil and natural gas under the ground and nearby ocean floor. Another has been more than a century of mostly supportive government policy. This support has taken the form of not just legal advantages (most mineral rights in the U.S. are privately owned, not government property as in other countries) and tax breaks (which go back at least to the Revenue Act of 1916), but also huge military expenditures to protect the interests of U.S. oil companies overseas.

Since 2005, the tax preferences for renewable fuels have been bigger than those for oil and gas. But they're less secure in a Republican administration than a Democratic one (although they did survive last year's tax bill mostly unscathed), and I think it's accurate to say that U.S. policy on renewables since the 1970s has been marked more by ambivalence than anything else. Which makes a certain amount of sense: Renewables are competitors to fossil fuels. The U.S. leads the global fossil fuels industry. It can be tough to dominate both an incumbent industry and the one that aims to disrupt it. That doesn't mean it isn't worth trying, though.

This column does not necessarily reflect the opinion of the editorial board or Bloomberg LP and its owners.

To contact the author of this story: Justin Fox at [email protected]

To contact the editor responsible for this story: Brooke Sample at [email protected]

Give the gift of solar energy and make a building greener.

An impactful community for solar on the Green Belt.